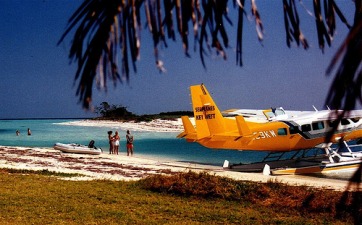 Floatplane pilots are individualists - they are free, as pilots were always meant to be. . .- Frank Hofmann

How many seaplanes are there? It is estimated around three thousand. Each of their pilots has stories to tell of wonderful places seen, fish caught, camps set up and visited, friends made, repairs executed, flying conditions met and conquered. These pilots are individualists who prefer no line boys, no paved aprons, no dispatchers, no tower control, no line-ups for a runway. They are enroute from the moment they untie the plane. They are free, as flyers were always meant to be. But remember: Stick ALL the way back.

Whose is better off, someone living on the beach in the tropics with coconut trees all around, (chicks in bikinis too!)and home every night, or someone earning a great deal more, but spending their life in hotels and twiddling their thumbs at 30,000 feet between one big stinking city and the next? Only you can say for yourself…
- zakpeegoodus

Visions of freedom come in many forms, one of which is an airplane that's equally at home whether on land, on water, or in the air. Although an aerodynamic compromise, the amphibious airplane is viewed by many as a virtual freedom machine that can, in many parts of the globe, function independently of runways.
- Budd Davidsson

Anywhere there’s blue on that map and there are no airfields, we can sell them.
- V.L. Manuel, president of Antilles Seaplanes LLC, speaking of their 'new' Goose

A shower of spray and we're away!
- Fred Ladd

Some people are not cut out for seaplane flying. They have a macho attitude toward it, and that's the type of attitude that's going to get you in trouble.
- Mike Volk, president of the American Seaplane Pilots Association

Taking off and landing in the water held a romantic fascination for me.
- Jimmy Buffet

This strikes a chord, the sleepy splash of water, a flying boat riding quietly at anchor. Its a scene from my childhood.
- The Last African Flying Boat.

Go get a float endorsement just for the hell of it, even if you never fly 'em again...great fun!
But im sure once you've had a go at floats, you'll want to fly them again
- disco air

As disco air says, go get a float endorsement just for the hell of it, you’ll enjoy doing the rating and with persistence after that you might get lucky!
- zakpeegoodus

If you want a GA career and an interesting relaxed lifestyle, floats is the way to go :)
- MACH082

Floats will make great reading. Best seller for sure. Best Wishes and enjoy the most fun you can have with your clothes on.
- dash 27

Washing the tanks out each night, cleaning the aeroplane along with cycling fresh water through the turbine can be a downpoint especially after a long day
- MACH082

Seaplanes are simpler to fly than helicopters, more reliable, less expensive and have longer range.
- Edward Martin and Irwin Speizer

Down the ramp and into the damp.
- Fred Ladd

Go for it you won't regret it ever.
- Randy maag

Being able to land in the water gives me lots of liquid runways along the shores of the Gulf of Mexico and the beaches of the Bahamas where I can drop my anchor and climb out on the wing for a nap or a swim.
- Jimmy Buffet

Seaplanes are great and generally the work environment is pretty positive, especially if you are flying happy tourists to beautiful places. I can understand why you are so keen on them.
- pithblot

Personally, one of my other passions is the water and, if I’m not flying, then I am happiest sailing, cruising or jet-skiing on the river or ocean. So, being able to combine the two is my idea of heaven.
- Ali Telling